Some of the Top Players of All Time

Table Tennis is like many other sports, in that its fans can rarely agree on just who was the greatest player of all time. While every fan will have their personal favourite, others will repudiate their argument with glee. Any list of the greatest table tennis players of all time cannot help therefore but be a personal and subjective view. However there are some players who would make it onto anyone's list of the all-time greats.

It would be necessary to head back into history, before World War Two. The great Hungarian player Viktor Barna - http://en.wikipedia.org/wiki/Viktor_Barna may not be featured too often on www.bodog88.com - http://www.bodog88.com/, but his name is never forgotten by true fans of the sport. Certainly, if he was playing today, he would be making money for punters laying down bets on bodog sports betting.

This incredible player won gold medals at the World Championships no less than 21 times while competing for Hungary, and once while competing for his adopted country of England. He also won a heap of bronze and silvers, his medals being in the singles, doubles and team competitions. He even found the time to fight in World War 2 in the British Parachute Regiment.

There had been some concern that the player's skills were fading over the beginning of 2013, as he lost to a string of foreign contenders. But his performance against Wang Hao in the 2013 final showed he had really returned to his best form. On his best day, Jike's sheer speed is impossible to live with, and he could yet become the first player to win a grand slam of titles twice. Any lovers of online sports gambling would be well advised to head to a site like bodog sports and place a bet on him doing so. It would certainly be foolish to bet against him in his current form.

It would be wrong for anyone writing about table tennis to omit a female player from any list of all-time greats. As the recent women's final at the World Table Tennis Championships - http://www.mhtabletennis.com/2013/05/li-xiaoxia-completes-grand-slam-with.html showed, women are some of the real stars of the game, with Li Xiaoxia beating Liu Shiwen in a superb match and becoming the 4th female player to claim a Grand Slam.

Perhaps the greatest female player of all time though was Deng Yaping, who's peak came in the 1990s. The diminutive star, who was only 1.5 metres tall, won her first Chinese National Championships at the age of 13.

She won singles and doubles gold medals at the Olympics in 1992 and 1996, and when she retired, at the age of just 24, she had captured more titles than any player in table tennis. Her final tally included 18 world titles, as well as her four Olympic golds. A bodog sportsbook in her day would surely have had to feature this amazing player.

Many people who enjoy table tennis and free gambling games online will know all about the final player on the list, the great Swede, Jan-Ove Waldner. Sometimes referred to as 'The Mozart of Table Tennis', this silky Scandinavian was known as 'Evergreen' by his legions of Chinese fans.

The name 'Evergreen' is appropriate too, as this star is still playing at a high level at the age of 47 currently in the Swedish A league. He is now playing against players who were coached by stars he played against in the earlier decades of his career. At one point he was better known in China than US President Bill Clinton.

Waldner is also one of only five players to have competed at all of the Olympic Games - http://olympic.org/ since table tennis was introduced for the first time in Seoul in 1988. He is also one of only four male players to have completed a career Grand Slam of titles, a feat he managed in 1992 after winning the Barcelona Games. For his longevity, as well as his considerable achievements, the Swede is a worthy inclusion on every list of the games' greats, if not at the top.
Posted by MHTableTennis No comments:

Daniel Habesohn created a reaction to be remembered, not just in the Bercy Arena, Paris, but around the world on the internet. How? Well he performed an amazing shot behind his back, against the Chinese and at the World Table Tennis Championships no less! Well I thought it would be a great idea to ask the question we all wanted to know, what was the moment like? I put the question to the man himself, did he plan the shot? How did it feel to pull it off? How did Ma Lin and Hao Shuai react?


'I also want to know the thoughts of Ma Lin! :) I started moving across for my forehand and then it was already too late for me to have a chance to play a backhand, so I had chosen the behind the back shot because it was my only chance to hit the ball. And I did! :) So it was kind of a reflex.

Sure it felt good because I saw the ball is on the table. Not just that, I hit it really good and the ball was fast and very long to the line so it was difficult for Hao Shuai to get the ball. The reaction of the spectators was great!' - Daniel Habesohn, Austria.

And of course here is the video of the amazing shot below!


Posted by MHTableTennis No comments:

I am lucky enough to be able to present to you some statistics collated by a good friend of mine Matt Solt a.k.a TTGuru. Matt works endlessly over the tournament to database the result of every match so he can organise these statistics, it is not easy work!

The match with the highest total points was in the Men's Singles Round of 64:

The matches with the lowest total points were in the Women's Singles Group Stage: 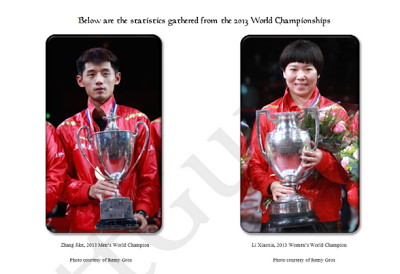 TTGuru selects Kenta Matsudaira as his outstanding player award. A selection I can definitely agree with!
Posted by MHTableTennis 4 comments:

Adrian Crisan has fallen short of his goals at this year's WTTC where he hoped to reach the last 32 and take on Zhang Jike. Instead he was beaten by a determined Omar Assar, the Egyptian star who trains full time at the Falkenberg club in Sweden. See my highlights of the match below, a full 7 set duel!


Posted by MHTableTennis No comments:

Success for Simon Gauzy but it almost wasn't good news for Adrien Mattenet, the face which has been promoted on behalf of the host for the 2013 World Table Tennis Championships - France. As he entered his match against Italy's Niagol Stoyanov he certainly didn't seem all there to begin with. The passion and energy which captivated the crowd at the World Cup in Paris in 2011 just wasn't apparent as Stoyanov took the early lead.

Errors were high on both sides and although Mattenet came back to take the next 2 sets by comfortable margins, he still didn't appear to have the fight in him just yet, the fluency of strokes which had helped him beat the world's best on occasion weren't flowing so greatly. For that reason Stoyanov led out on the offensive, easily winning the next 2 sets.

Frustration set in as Mattenet fell under the pressure of an expecting crowd who had all come to see their number 1 player perform in his first match. Right now Mattenet was looking like losing was a very real possibility. Trailing 3-2 is not a great place to be in your first match but it sparked exactly the fighting spirit that Mattenet needed. Positive body language came back, confident strokes, there was a shift in momentum as Mattenet came surging back into the game. Niagol Stoyanov had nowhere to hide.

The shift of power in this match was exceptional, each set was won with comfort including the last 2 which shifted in favour of Mattenet. As his passion rose and he psyched himself up, the points started falling in his favour, the important shots started going on and as he lifted himself up, the crowd of enthusiastic supporters swept him off his feet and carried him through to victory.

Simon Gauzy's match was a battle of creativity, fantastic shots and great rallies. Gauzy asserted himself 4-1 over Korea's Seo Hyun Deok, arguably one of the world's better players previously being top 30 in the ITTF World Rankings. This is a great win and shows the progress of Gauzy who last month won the French National Championships. His fluent attacking style on both wings and ability close and far from the table will be a great asset to him in this event, proven so already.

Again the Bercy Arena fired up for their host player, the excitement was electrifying. Taking the first 2 sets it was just a short disruption, one set falling the way of Seo before Gauzy finished the job. The last 2 sets were incredibly close and could have gone either way, but Gauzy executed with a high level of commitment and risks paid off to award him the match.