Young Star rises in the United States of Ping Pong

I had the opportunity to interview a rising young star and the next generation of top player from the United States. It's fantastic to see young players from the States joining the world's best. Thanks for the interview Lily!

How long have you been playing table tennis, when and how did you start?

I’ve been playing table tennis for around 8 years now. I started when I was 7 years old and my parents used to play for fun so I picked up on the sport.

Who has been the biggest influence on your career so far?

My parents are definitely a huge influence on everything I do, especially my table tennis career. They’ve been so supportive of me and encourage me to do what I love. I wouldn’t be where I am without them.

What is your biggest and proudest moment in table tennis to date?

I’ve had many great experiences in table tennis so I can’t say I have one specific experience that was the best.

What is your next big goal for table tennis?

My next goal is definitely to make the 2012 Olympics in London. I recently made it on the US Olympic team but we need to beat Canada in order to qualify.

What do you think the sport of table tennis is lacking around the world? What could be done to improve it from an international player’s perspective?

I wouldn’t say it’s lacking anything really, but I think if more people from more countries participated, it would definitely heighten the experiences. For example, it’s not really the most well know sport in the US but it is growing significantly.

Again, I’ve had many great training places, but a few of the best is probably China and the club where I currently train, ICC. China has a very rigorous and effective training program and the coaches at my club are great and give me so much advice.

I always give a point a 10-0 because I think that’s the right thing to do and it’s good sportsmanship.

You’ve already competed in an astounding 3 World Championships. What is the hardest thing about competing internationally at such a young age?

I think it’s actually great to compete at a young age. It gives you so much experience, and it’s absolutely amazing watching the top-ranked players in the world play.

You recently had some great success at the world junior championships, tell us a bit more about the experience and how you went.

World Junior Championships overall was a successful tournament for me, but there were also a few road bumps along the way. I wasn’t performing my best in the first few matches for teams but as the tournament went on, I became more relaxed and was able to play my real game. Although I would have liked to keep going, I lost in top 16 to China.

Dream Car: For now, any car would be great since I don’t even have my license yet.

If you were stuck on a desert island, which table tennis player would you have with you there? Everybody! I can’t choose, it’s too hard!

First thing you would do if you won $1 Million: Roll around in the money! No just kidding, probably donate some, shop a bit, and save the rest.

Leading Germany to Europe's Pinnacle On the Table and Off

I was lucky enough to score an interview with one of the table tennis greats of Europe, Jorg Rosskopf a.k.a Rossi. I always felt Rosskopf was a player who had great success but lived in the shadow of players like Persson and Waldner and got less recognition for his achievements. Retiring in 2010 he became the National Coach of Germany and has continued his great success in that role. Thanks for the interview Rossi!

How long did you play table tennis for, when and how did you start?
I started when I was 5 years old and played until I was 40.

What was the highlight/best memory of your table tennis career?Winning the 1989 WTTC gold medal in mens doubles with Steffen Fetzner and winning Olympic medals in both 1992 and 1996.

You played in an era with some of the most reputable and respected players of all time (yourself included). Who was the player you enjoyed playing the most?
The best player ever is Jan-Ove Waldner and he was the most difficult to play against.

How does it feel to have the opportunity to go from being Germany's leading player of the time to now having the opportunity to be their national coach?
It is a big pleasure to work with such a strong team and I hope I can improve them a little bit more.

How do you think Germany will perform at the WTTC team event in 2012? Do they have the potential to equal or better their previous silver medal result?
That is our target to go to the final

The young French players have been making a big impression on the World Tour lately with some big wins. Patrick Franziska also shocked followers with wins over Persson, Tokic and Chuang Chih-Yuan at the recent Qatar Open, do you think Patrick will be the next prospect for the top German player?
He have the power but it is very difficult to say what he will acieve in the future, but he has the chance and a good background to became a good player.

What does Germany (and Europe) need to change in the way of training in order to compete with the Chinese National Team?
They have to work more and spend more time training and less time with breaks.


Do you think the change in your era from the 38mm ball and games to 21 to the 40mm ball and games to 11 improved the sport of table tennis?
The ball has no affect, but to change to 11 was a good idea because now there is more and earlier tension in the game.

Have you or the Germany National players had the opportunity to try the new material table tennis ball prototype expected to be released after the Olympics? If so, how do you think that will change the game?
No

Which European players do you think will pose a threat to the Chinese at the Olympic Games? Perhaps Ovtcharov, Skachkov etc?
Now Boll and Ovtcharov from Germany, Mizutani from Japan and Joo Se Hyuk from Korea and in the future Ovtcharov, Baum and some french players I think also.

What would you like to achieve as German National Coach while you are in that position? I.e your biggest goal.
To win against China in a final.

What is your opinion on the careers of Ma Lin and Wang Liqin? Do you think they will be in the Chinese National Team much longer?
No, I think after London Olympics they will stop and the Chinese will push the new generation of players.

Who’s your favourite sportsperson of all time?
Federer

First thing you would do if you won $1million?
I will change nothing, I would invest in the future of my family and friends

Who trained the hardest in the training hall?
Roßkopf, now Filus, Mengel and Franziska

Who had the best nickname?
Rossi

Describe each of these players in ONE word:Jan-Ove Waldner: Gambler


And Lastly
Would you like to add one last tip, or an inspirational message for other table tennis players looking to succeed?Live your dream and fight till the end

Clash of the Eras: Ma Long vs. Jan-Ove Waldner

Nobody has ever doubted that Waldner is one of, if not THE, greatest player/s of all time. Recently however a rapidly growing support for Ma Long has arisen. Having recently equalled Wang Liqin's record for the greatest number of successive Pro Tour tournament wins, Ma Long has got the world on their feet. Despite his team mate Zhang Jike winning both the World Championships and the World Cup, the fans still sway in Ma Long's favour. So the real question is, is Ma Long a greater player than Jan-Ove Waldner? 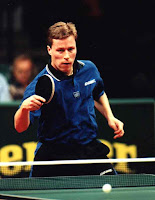 For arguments sake Waldner's history of event's won is much more significant and Ma Long's most major event is the Pro Tour Grand Finals, he hasn't even won a major World event. He does of course have a high probability of an Olympic medal these coming Olympic Games should he be selected. So despite Waldner's reputation as 'the world's greatest ever' does Ma Long have the potential to claim that title?

Waldner's precision and showcase touch around the table inspired generations of players in Europe and around the world. Unique style of play and a talent for spin and ball control. Ma Long captures the essence of speed and power in the game and demonstrates overwhelming dominance in open rallies and ability to attack early in the bounce. So the players although well rounded players, both exhibit some opposites, which makes the debate all the more interesting. Either way I don't think a conclusion will be reached anytime in the near future, though the discussions will be long and fierce between opposing fans. For both groups I've made a video showcasing the genius play of both players side by side!