Once again I had the distinct pleasure of sending off an interview to Vladimir Samsonov after the Olympic Games to see how he felt about the games and his performance there. I tailored in some more specific questions to get a bit more detail on his campaign in London. Thanks again Vladi for continuing to support my blog! :)

How happy were you with your Olympics Campaign overall?

I guess that I sound a bit negative, but I always wanted to win a medal. Hard to imagine that I could do that in 4 years.

You had quite a tight match with William Henzell, what were your thoughts going into the match?

William is a tough opponent. I also watched his match against Monteiro the day before. I knew that his backhand is very dangerous. Of course, I tried to prepare as good as possible.

How did those initial thoughts change during the course of the match?

Both of us had a chance to win every set. I tried to play more to his middle and forehand, tried to find a weak spot in his game. I am not sure whether I succeeded in that. Eventually I just wanted to win the next point.

6-2 down in the 7th is that one of your best time-outs ever? 8 points in a row at the most crucial point in time and at the Olympics!

I think it was 3-5. I do not know what happened after the side change. I think it is just a coincidence, definitely not change of tactics.

How did the match with William prepare you for your next match against Zhang Jike?

Usually, after a such a difficult match you are more relaxed, more confident. I wanted to win very much, but was more exited than nervous, on the contrary, Zhang had a lot of pressure.

You had a 7 set match with the World Number 1, what does that mean for you?

It was one of the best matches I played in a long time, still, after I was out of the competition.

Where do you think chances were lost in that match which could have changed the result?

I easily won the first set and needed a good start in the second; then in the beginning of the sixth set, in the few points I risked too much; also, in the last set, in the 2 long rallies I had to play long line instead of his forehand.

What are your plans now that the Olympics are over?

I am already in Suzhou playing China Open. Whole September is full with competitions.

What was the first thing you said to William after your match against him?

I do not remember, probably, that it was a good match and that I was luckier.

What was your highlight of being in London?

Did you attend the opening and closing ceremonies? How were they?

No. I went to the opening in 1996, it takes to much time and energy. Competition comes first.

What was your favourite thing to eat whilst in London competing?

There was too much of everything. I guess miso soup.

Who was your favourite athlete to watch during the games?

Singapore's table tennis star Feng Tianwei who won 2 bronze medals at the recent Olympic Games took timeout to try something a little different, go-karting. Tianwei who says she loves the thrill and speed of karting will actually be participating in the KF1 Karting Championships as part of a Singapore team made up of a pro driver with other sporting athletes, something she seems to be looking forward to quite a bit!

She has assured fans that despite the stint there is no plan to leave table tennis just yet! 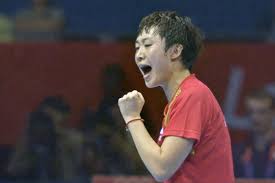 Posted by MHTableTennis No comments:

The Olympic Final, two Chinese players, two players competing for the final piece to complete their grand slam. Wang Hao a 2 time Olympic finalist seeking out a dream to win gold in London, Zhang Jike the hotshot powerhouse, current world champion and world number 1. The match was set to be one of amazing quality as both players gave it their absolute all.

The start went very much in Zhang Jike's favour, he powered ahead to claim quite an extensive lead in the first set, only to have it clawed away at by Wang Hao. It went to deuce and still at 14-14 there was no outcome. A flick error left Zhang Jike wishing he'd closed the first set off earlier but Wang Hao couldn't convert, 15-15. Wang Hao had another opportunity and failed, it was 16-16. Zhang Jike went up a point, could he convert it to the set he so thoroughly deserved in the start? He called a timeout, a surprising move for the world number 1. Clearly getting ahead was first on his agenda, he did just that with an excellent service receive to the forehand side just out of reach as Wang Hao flew round the corner expecting a pivot forehand opportunity.

Taking no such risks in the second set Zhang Jike was off again leaving no margin for error. Claiming point after point and utilising his marvelous reverse serve to open up 3rd ball attack opportunities, it was Zhang Jike who took a 2-0 lead in the match. Speedy backhand to backhand rallying seemed to be the common theme of the match so far and Jike had, as usual, made great use of his backhand flick off Wang Hao's serves. Zhang Jike on the other hand was targetting Wang Hao's weaker forehand flick which presented simpler opportunities for him to attack the receive. Long fast serves came into play on occasion and the rallies which followed were of equal speed, amazing table tennis. The looping game was opening up from the World Champion but Wang Hao was clinging on tight in the 3rd set, but again it was Jike who broke away after the halfway mark and ploughed his way to an 11-6 win and a 3-0 lead.

Wang Hao's chances of Olympic gold were fading and it was probably looking all too familiar for the 2nd seeded player. Would it be another silver to the collection? At this stage it looked as though Zhang Jike was unstoppable in this final. Again in the 4th Zhang Jike set off at flying pace. Wang Hao called a timeout to try and halt his opponents rush of momentum, it appeared successful, Wang Hao was able to cling on with the score drawn at 8-8 towards the end of the set. The set hit deuce again, Wang Hao throwing away a set point with an unreliable forehand flick but converting his 2nd game point to bring it back to 3-1.

Wang Hao took a massive 5-0 lead in the 5th set but Zhang Jike demonstrated his superb control and came back to trail by one point at 5-6. A vicious forehand flick at 6-7 levelled the score at 7-7. An edgeball sparked controversy as both the umpire and Wang Hao rejected the appeal of Zhang Jike, he kept his composure to stay in the game trailing 9-8 and then drew it even at 9-9. Full length it would be but there was no stopping the Chinese superstar Zhang Jike. Another silver medal for Wang Hao to live with, a grand slam for Zhang Jike becoming the only athlete ever to hold the World Championships, World Cup and Olympic Mens Singles titles simultaneously!
Posted by MHTableTennis 1 comment: