Andrea (or Andi) Todorovic can often be seen gracing the pages of a Butterfly Catalogue or in action in a Butterfly video clip. Andi is a 1.8 meter tall table tennis machine from Serbia who competes in the German League and gets a lot of enjoyment out of photoshoots. For these reasons I decided she was the perfect candidate to include in my Ping Pong Runway. Here is what the lovely Miss Todorovic had to say :)

As with all the ladies so far, Andrea joins the ranks of the skirt wearer. She believes that shorts are a little too manly and also prefers skirts over dresses as she believes they are not only more comfortable, but allow for more outfit colour coordination with shirts. Andi can usually be seen wearing skirts in play and loves what she wears because it is girly and classy.


While looking good on the table was the topic on the cards, Andi is a humble and dedicated sportswoman. She firmly believes that looking physically good is not all that important in her eyes. What is most important in her opinion is the character and spirit of a female player, the charm and also the sportsmanship.

Andi talked a little about photoshooting and what she likes about it. She loves the preparation for the photoshoots, the hair and makeup and clothing. She said it can be exhausting and sometimes she thinks photoshooting is harder than practicing 3 times a day, but she loves posing and meeting new people at each shoot and overall it is great fun!

Her favourite photoshoots are with Butterfly, Andi claims that they are the best shoots and she loves the feeling when the catalogues come out and everything looks good and professional and the equipment is endorsed well. Andrea said "I am so proud when they call me to take photoshoot or videoshooting with them (Butterfly)" and said it is a pleasure to work with them.

When I asked what the most fun she had on a photoshoot was Andi was quick to tell me about her video shoot for the Butterfly App. After having been sick for 2 weeks she was told she would be hitting with Timo Boll for the filming. Her first reaction was "Oh my GOD, I haven't played for 2 weeks and now I have to play with Timo Boll!" After all the built up nerves everything went smoothly and it was all a lot of fun. I could tell how relieved Andi was just from hearing the story :D

If you looked at Andrea Todorovic you would instantly wonder why this girl was a table tennis player and not a model. Well the truth is that despite being a 1.8 meter, long legged attractive and lean looking Serbian woman, Andi Todorovic is incredibly passionate about table tennis and as I finished my short interview with Andi she made this comment. "To them I say, I only want to play table tennis, but if Victoria's Secret calls me, then why not ;)"

Thank you so much Andi for taking the time to walk and talk the MHTT Ping Pong Runway and good luck in Japan! :D

Betting Can Inject a Thrill Into Table Tennis

For those with an interest in watching and potentially betting on competitive professional table tennis, there isn't a great deal of opportunity. For a sport that so many people enjoy playing in basements, with friends, and even competitively, it's quite surprising that there isn't more television focus on the professional level. In fact, outside of China (where the sport has more of a public following), most people's only real chance to watch competitive table tennis is during the Summer Olympics every four years. 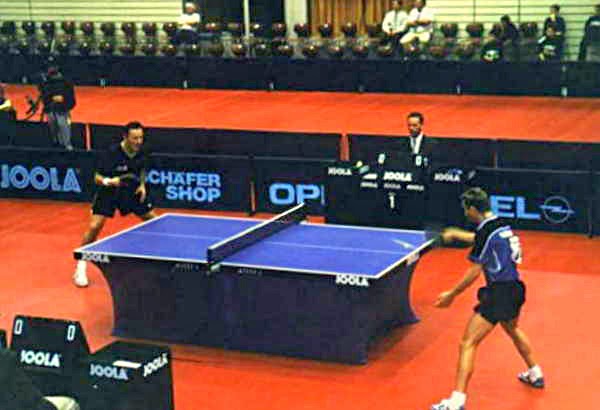 Somewhat surprisingly, though (for those who haven't tried), table tennis can actually be a very entertaining sport to watch, and particularly to bet on. Matches are played with incredibly high energy and intensity, and it's nearly impossible to watch a match without gaining a respect for the competitors. And as with any sport or competition, this is one aspect of what makes betting on table tennis enjoyable. A high-energy competition is always even more fun when you have something on the line!

Additionally, there is more to betting on a competitive table tennis match than simply choosing the winner. Although, that is of course a popular option, as well as the easiest option for a spectator who might be new to the sport. However, as explained in a table tennis article published by Gambling.com, there is an additional element to betting in this particular sport that keeps things interesting and unique for spectators: taking the over/under on how many match points will be played in a given match.

For those unfamiliar with sports betting in general, the over/under simply refers to a number set by the oddsmakers for a given result. So, for example, in a baseball game the over/under might refer to how many total runs will be scored in a game, or even what the margin of victory for a given team will be. You then place a bet based on whether you think the actual number will be over or under the oddsmakers' pre-game estimate. And in a set of odds for a competitive table tennis match, the over/under generally refers to how many match points will be played.

Not only does this provide spectators with a fun second option for betting (rather than simply who will win), but it is also an interesting option in that it specifically caters to closely contested matches. In a table tennis match with a clear favorite, the number of match points will generally be easier to predict, because it is expected that the superior player will take care of his or her match points with relative ease. In a close match, however, the number of match points will often be both higher and more difficult to predict, which provides a thrilling element to the strategy and consideration of placing a bet.

All in all, the betting element can offer extra incentive to give table tennis another chance the next time you find an opportunity to watch it. Many dismiss it as a "game" rather than a "sport," and again, its limited television exposure doesn't help. But the talent is real, the matches are thrilling, and by putting a little bit of personal risk into the experience, you may find a whole new sport to enjoy!
Posted by MHTableTennis No comments: