I was fortunate enough to venture up to North Harbour for the day today to check out the final day of the Junior Nationals tournament, was great to see some good friends there for the day and to watch some good matches. After his intense performance winning the Under 18 event the evening prior it was up to NZ National Mens Champion Roger Rao to sweep the singles title for the Under 15 boys also, overcoming Dominic Huang of Australia in the final 3-1 and sister Ruofei Rao to beat Samantha Ong also 3-1 in the Under 15 girls final.

The Under 15 Boys Doubles Final saw a spectacular show with Auckland's pairings clashing head to head. The team of Daniel Lowe and Xu Ning taking a 2-0 lead against team mates and opposition pairing Roger Rao and Victor Ma who fought off the onslaught of Lowe and Ning to take the match into a 5th set. After some incredible rallies and amazing play, Lowe and Ning converted their 14th match point to take the match and claim the title, an incredible effort by both sides. 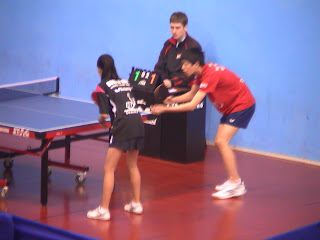 The Under 15 Girls Doubles title was claimed by Auckland Sophia Dong and Ruofei Rao who carefully dispatched of Canterbury's Ola Ratka and Juliana Hung 3-1. The Mixed Title was a rivalry of siblings, though not with each other for once! The pair of Roger and Ruofei Rao stormed the title in a 3-0 victory of Samantha and Jay Ong.

I managed to get a quick clip of this point to include with this info:


Dean Shu and Daniel Lowe lock horns. Dean coming back from a 2-0 deficit plays some spectacular table tennis and earns a place in the semi final of the Under 15 Boys Singles Event after an 11-5 victory in the 5th and final set.