Successor in the Wings for Germany's Top Spot

Another interview and another player who has cracked the world's top 20. Patrick Baum now ranked number 6 among European players and currently 23rd in the world, has made incredible grounds in the last few years and made his way into the German Men's team who succeeded in making the WTTC Teams Final against China in 2010 and of course made an astounding effort in coming 2nd at last years European Championships defeating former World Champion Werner Schlager of Austria and 3 time World Cup winner Vladimir Samsonov of Russia. It is an honour for me to present this interview to you all. Thanks so much Patrick! 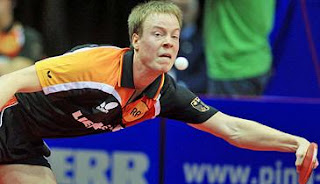 How long have you been playing table tennis for, when and how did you start?
I started at 6 years old. I started because my older brother also played table tennis and I wanted to do the same like him.

What has been the highlight of your table tennis career so far?
Last year, when I got Vice European Champion in Singles was the best result right
now.
Patrick's amazing Semi Final match vs Vladimir Samsonov at the 2010 European Championships
Video by TTCountenance

What's does your training schedule for a week period involve?
I am playing about 4-5 hours table tennis every day and sometimes fitness.

What is your next big goal for table tennis?
I would like to come under the top 20 in world ranking again.

Who has been your biggest rival out on the table since you started playing?
I didn't have a big rival out of table tennis.

What do you think is the most important thing in table tennis for becoming a successful player on the international stage?
I think you have to start quite early with table tennis, that you can learn everything and be very safe.

Do you think Germany has what it takes to win the World Team Championships next year?
I think we had a little chance last time in Moscow in the final against china, but it is hard to come to the final and then we will see. 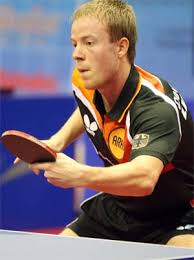 What do you do when you aren't playing table tennis?
I like doing other sports, most of all football

First thing you would do if you won $1million?
Change into euro :)

Who’s the funniest player in the training hall?
Janos Jakab

Who trains the hardest in the training hall?
Many players are practising a lot every day

Who’s the funniest team player?
All of my team mates are very funny.

Who has the best nickname?
Bolle for Bojan Tokic


And Lastly
Would you like to add one last tip, or an inspirational message for other table tennis players looking to succeed?
I wish everybody all the best and a lot of fun with playing table tennis.