Sweden's Top Aims to Get Back on Par

Pär Gerell is a household name in the Swedish National Team and also in the European League competitions, both the French League and the European Champions League. Formerly top 50 in the World, that is where he aims to be yet again in 2013! Thanks for the interview Pär!

How long have you been playing table tennis for? Who or What influenced you to start playing?
I started when I was 7 years old, so 23 years.. I tried many sports and one friend took me to the table tennis hall and I liked to play directly.

What has been the highlight of your career so far? Your proudest moment.
I think silver medal in Europeans in team was a highlight.. Also when I became Swedish champion in mens singles and when we won French league with my club ASTT Chartres.

You currently represent Chatres in the French League. How long have you been with that team now and how do you feel it has prepared you for international matches?Its my third year with the club now, and I feel really good in the club.. I travel from Sweden to all league games, so of course sometimes when you go to an international tournament you are little tired from all trips and games, but normally it's no problem. 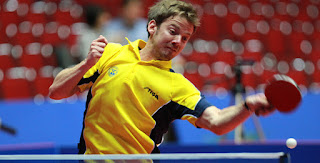 Which matches do you prefer playing, league matches or international matches and why?
I really like to play with a team, because then you are winning together and you have somebody to share it with.. But of course the most fun is to play the big championships, like Worlds, Europeans and Olympic games.

Chatres won the ETTU Cup in 2011 and you began by defeating Chuang Chih-Yuan. Would you say this is one of your most prominent victories to date?Yeah it was a big victory for me and the club, also in team Europeans 2011 I won some important games on the way to the final, and I rank this victory very high also. Is something special to represent your national team and win important games for them.

How is the table tennis situation in Sweden? Do you believe they have the potential to be the best in Europe once again? What will it take?
I believe so. We have two very good coaches now in Ulf “tickan” Carlsson and Anders Johansson, and they are now trying to rebuild little bit, so we would have a chance in the future to be the top nation in Europe again.


One of my favourite matches from the ECL

Recently you have had a bit of a slump in the ITTF Rankings due to an injury. How tough will it be to recover from that?
Yeah I lost some close games in the spring and summer this year so I fell down on the ranking.. Also I had problems with my hipp in the beginning of autumn so I couldn’t practise as I wanted. But its better now, and I start to be back in shape again, so I think for sure I will make some good results in the beginning of next year.

What do you think Europe need to do to pose more of a threat against the Chinese players in the future?
We need to work together more, like as we did before Olympics.. Then we had training camps together with all the best European teams and players.. Then I think we need to change the league system. We play almost everyweek league games or champions league, while the Chinese play their league in three month, and then after they can make longer training periods with hard practise.. In Europe at the moment, is difficult to find spaces between the games to have really long and hard training camps.