Brazil's Champion on Comeback for London

Having recently returned from Magdeburg where he contributed to Brazil's win of the Intercontinental Team Cup yet again, Thiago was kind enough to do this interview with me. Having been well into the top 100 players in the world Thiago is now recovered from injury and is looking to get back on form in time to try and qualify for the Olympic Games in London 2012. Thanks Thiago and enjoy reading everyone! 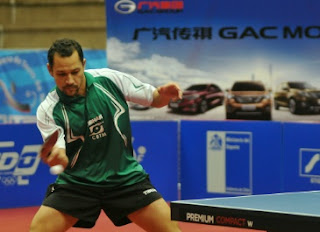 How long have you been playing table tennis for, when and how did you start?
I play for 25 years, I start with my father at age of 5 years old!

What does your training schedule for a week period involve?
I practise table tennis twice a day from Monday to Friday and once on Saturday. With 2 or 3 physical sessions during this time. Nowadays I am coming back from injury and it has been a little less than what I would like to.

What is your next big goal for table tennis?
Next big goal is to qualify for London Olympics.

Who has been your biggest rival out on the table since you started playing?
I have had some at every stage of my career. At the beginning some friends in my country who were fighting with me for spot in National Team, then some opponents in international competition.

What do you think is the most important thing in table tennis for becoming a successful player on the international stage?
There are many things such as discipline, will, intelligence, support from the family. It is impossible to have everything but one need to have some of those to be successful.

Previously you have been well into the top 100 players in the world, is that a position you are fighting strongly to regain?
Yes, I was well but got injured but I am better now and I am practising to be back to my former level as soon as possible. It makes life much easier to have a higher world ranking sometimes.

Why do you think China currently dominate the sport?
Chinese have the best coaches, work harder, study the game, invest a lot. Normal that they are too good, it is very simple actually! They devote their lives to the game and just get back what they deserve.

What is the state of table tennis in Brazil? Do you see table tennis ever becoming a popular sport there?
Table tennis as a hobby is quite a popular sport in Brazil. we are putting a good effort to make it more professional and bring more people to official competition but it takes time. To have the Olympics in 2016 can be a defining moment for us if we do a good job!

Who is your favourite sportsperson of all time?
I am not the kind of person who has idols but I like some; such as Ronaldo, Senna from Brazil, Valentino Rossi, Kelly Slater, Jordan. In table tennis I like Waldner, Samsonov, Gatien.

Favourite Food?
I like brazillian barbeque or anything mom cooks when I am home!

What do you do when you aren't playing table tennis?
I read, watch movies, surf on internet. I like to play other sports but I avoid not to get injured.

Dream Car?
Ferarri, Porsche, Lamborghini or some nice car of that style

Ideal Holiday Destination
Fortazela, which is my hometown in Brazil, or any place with hot weather. Hot water beaches and a nice night life!

First thing you would do if you won $1 million?
I would not change my life much if I had 1 million. I like what I do so my life would be pretty much the same and I would actually think of a way to make this money work for me so I never need to work anymore!

Who is the funniest player in the training hall?
From the players I have spent time with I would say my good friend Thommy Keinath

Who trains the hardest?
When you practice with professional players they all train hard, that is not really a problem!

Would you like to add one last tip, or inspirational message for other players looking to succeed?
Enjoy life and have fun!!!
Posted by MHTableTennis