It was great to finally get back this interview from Margaryta, I've been giving her hell for a while and she finally gave in. Margaryta plays in the Russian League competition while living and studying in Ukraine, I get the occasional opportunity to have a chat with her while she's home in Ukraine which is always cool, she's a great invididual and a very talented table tennis player. Thanks Margaryta! :) 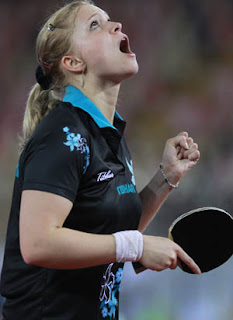 How long have you been playing table tennis for, when and how did you start?
I have been playing already 15 years. I started to play tt in Poland when I was 5 years old. My mother worked as a coach and I always was near her playing with a bat and table tennis balls, she saw that I liked it and since then decided to teach me to play.

What has been the highlight of your table tennis career so far?

My best highlights in tt were: 9 European Champion Youth and Cadet titles (gold medals during my junior and cadet career)-team competition,double,single.;World Champion in cadet category in 2005 in Santo-Domingo, 3rd place in European Championship Women's Singles 2011.Qualified for Beijing Olympic Games at 16 years old.


What is your next big goal for table tennis?
For this moment my next big goal is to win gold medal in European Championship.I know it is very difficult, but I will try.And of course to be qualified for Olympic Games 2012 in London.

Who has been your biggest rival out on the table since you started playing?
Asian players are the biggest rival in my sport. Always difficult to play against them. But I work and I hope in the future results would be better.

Who is your favourite international player and why?
I don't have one favourite player, I just like to watch all the top players playing, every one of them has their own style of game and individual ability.

Are you a supporter of skirts and sports dresses for women or shorts?
I think it looks more attractive in womens tt playing in skirt and dresses, some fashion must be present. And for spectators it brings more pleasure watching top women playing in such attire. So now I also play more in skirts than in shorts. 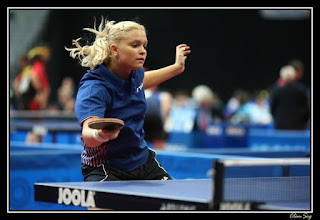 What do you do when you aren't playing table tennis?
Studying at university, spend time with friends and sometimes just like doing nothing ;)

Ideal holiday destination?
I would like to visit Venice and the Caribbean Islands

Who’s the funniest player in the training hall?
As I don't have a lot of players in my hall, difficult to name the funniest or who train the hardest, but in my national team I can say that all girls are good and I like to communicate with them, they are all very funny, especially Any Gaponova :)

Would you like to add one last tip, or an inspirational message for other table tennis players looking to succeed?
I would like to add that if you have a dream, believe in it and try to do best for your success and sooner or later your dream will come true.