One of the hottest debates in table tennis is the moral argument of whether or not to boost. I personally don't boost and choose not to purely because it is the rule of the sport that boosting is not legal. In saying that I believe that boosting should be made legal for a few very simple reasons. 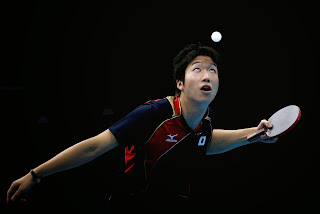 The new ball is designed to slow the game down, we all know that rubber manufacturers around the world are already doing their absolute best to combat the reduction in speed and spin by turning out generations of rubbers which are spinner and faster than ever before. We love this sport because of speed, we love it because of spin, so why reduce both? Why not allow booster so we can balance out longer rallies and still great speed, spin and control? We could avoid the frustrations of changing technique as much and having to deal with everything lagging. Of course this is not so important and is by no means the main reason why I think boosting should be legalized.

I do however believe that reducing speed and spin in the game has become a goal of the ITTF and this is the real reason why boosting is banned and not, in fact, the reason that it creates an unfair playing field as I will mention more below.

Speed glue was originally banned because of it's VOC content which was deemed to be harmful, some clever individual decided to consume come of it for reasons unknown to any intelligent human being. Most boosters on the other hand are VOC free, hence why they are undetectable by the ITTF in racket testing. If they are not harmful then there is no real reason to ban them in that aspect.

It Creates An Unfair Playing Field

This is the ultimate reason why boosting should be legalised. Face it, the ITTF can't detect boosters and for that reason they are also unable to police it. They are wasting time and resources to try and crack down on something unimportant. They want people to stop boosting out of fairness for those who follow the rules. Easier solution. Legalise boosting. This way the people who want to follow the rules, like me, are not disadvantaged against people who don't care about the rule and boost. It is difficult to play against a Chinese player with a freshly boosted bat when you are back in the dinosaur ages with your slower water based glued rubbers. They have an uncanny ability to make your loops look like trash. Granted a good player will be able to do this anyway, but sometimes you can see quite clearly how boosted rubber is giving them the advantage in the game.

So the real question is which scenario creates more of an unfair playing field? Booster being illegal where the players who abide by the rules are at a disadvantage, or booster being legal where everyone has a fair chance to be on the same playing field by choice and disadvantage is only upon those who opt not to boost because they don't want to.

Why Do I Care About the Rule?

You might say, well if you think the rule against boosting is so unfair and since ITTF can't detect it then why don't you just join the masses and boost anyway? Well in my opinion rules are rules and I like to follow them and so do many others. This rule, as stupid as it is, is in place regardless and so I follow it.

So what is your opinion? Should boosters be legalised, is the rule sane or stupid? Are boosters just illegal so we have to constantly buy the latest upgraded rubber constantly as we had to with the new tensor rubbers to combat speed glue illegality and again now we need new rubber to combat the new ball?

Always interested to hear people's thoughts on the topic! :)
Posted by MHTableTennis