With hundreds of millions of participants worldwide, table tennis is one of the most popular sports on the planet today. Ranging from club members all the way to those who just have a casual game whilst on holiday, its simplicity and ease ensures all abilities are welcome and catered for.

But sadly the women’s professional game doesn’t receive the coverage that its popularity justifies. Whilst the sport in general lacks the figureheads that say, Victoria Pendleton and Jess Ennis provide for British cycling and athletics respectively, the women’s game in particular doesn’t find its way into mainstream media outside of huge events such as the Olympics in 2012. This under-representation in the public eye perpetuates a vicious circle, leading to less young, amateur girls getting involved competitively in a sport that they don’t perhaps realise offers a genuine career. 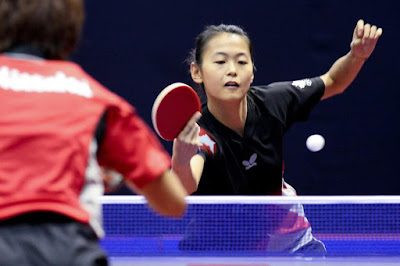 One clear advantage that the women have in table tennis is that the game takes sheer physicality out of the equation, meaning that technical ability does all of the talking. It follows that just like in tennis, when it comes to entertainment, the difference in quality between the men’s and women’s game is indistinguishable, perhaps even weighted toward the women given the competitiveness at the top of the rankings. Indeed, there’s no better time to get into watching table tennis, as the UK’s best women fight for a place on the Olympic team for Rio 2016, with the most recent qualifying tournament taking place in Brazzaville last month.

Whether you’re new to the women’s game or table tennis in general, things are changing. At the turn of the century several rule changes were enforced in an effort to make table tennis more spectator-friendly. First of all, any competitive women’s games that you do happen to catch on TV now, will be using a slightly larger ball than they did before 2001. This is in order to slow the game down a little, making matches more watchable for viewers at home. A second rule change enforced was that of shortening sets down from the first to 21 points to the first to 11. This has led to a lot more riding on every point, ramping up the in-game suspense and keeping viewers on the edge of their seats. There’s even talk of having boxing style walk on music for players, adding to the sense of occasion for a big match.

In the past year, broadcasters BT Sport and Sky have included live coverage of international table tennis tournaments on their schedules, with British husband and wife duo Paul and Joanna Drinkall having a high profile interview on BT Sport, so perhaps things are looking bright for the women’s game. There’s no arguing that any extra coverage would be warranted as, one thing’s for sure, few other sports have made such an effort to appeal to spectators.