How long have you been playing table tennis for, when and how did you start?
I started to play when I was 6 years old.

What has been the highlight of your table tennis career so far?
The semifinal at Junior World Championships in Team Event against Korea, we won 3:2 and I played my best table-tennis.

What is your next big goal for table tennis?
To come closer to the Top 5 in Germany

What was it like winning the 2010 European Youth Championships?
This feeling was awesome. The whole tournament I was not playing my best table tennis, but I was fighting.

You have met a few of the New Zealand Junior players, what was your impression of them?They are very funny and laugh a lot.

How much more of a step up from your level were the Chinese Juniors when you were playing under 18s?
I think we had good chances against them .In JWTTC 2009 in the team final, I had 5 matchballs , and the other match from Floritz was also very close. In 2010 JWTTC I lost 4:3 very close against Song, the World Champion.

What do you think makes the Chinese so dominant in table tennis?
They are very athletic, unbelievable power in their strokes and mentally, they are very strong.

What do you think Europe needs to do to improve to compete with China and Asia?
I think a little bit more power in their strokes, and just more practice. The chinese make no easy mistakes. 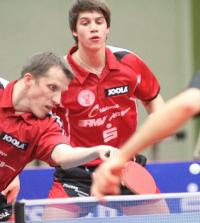 Who’s your favourite sportsperson of all time? Roger Federer
Favourite food? Pizza
What do you do when you aren't playing table tennis? I meet my friends
Dream Car? Audi R8
Ideal holiday destination? Mauritius

Who’s the funniest player in the training hall? Thomas Keinath

Who trains the hardest in the training hall? Steffen Mengel

If you were stranded on an island which team mate would you have with you and why?
Steffen Mengel, we are good friends and are living in the same house.

Would you like to add one last tip, or an inspirational message for other table tennis players looking to succeed?
Keep on going playing table tennis, also in hard times :-)
Posted by MHTableTennis