A Response from a Legend of the Sport Vladimir Samsonov

Well folks, I won the Interview Showdown and achieved an incredible feat for this small blog and am buzzing! Vladimir Samsonov is an inspirational European player often overshadowed by Timo as one of the greatest European players of all time. Having maintained a top 10 position in the ITTF World Rankings for a number of years now, Samsonov shows how experience, hard training and superior knowledge of the game can continue to bring the wins for those who are committed to the sport. Thank you Vladi for the interview! Enjoy people :) 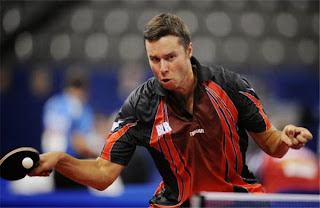 The Prince of European Table Tennis

How long have you been playing table tennis for, when and how did you start?
Almost 30 years , started when I was 6 , first time played with my father

Who has been the biggest influence on your career so far?
I worked with 4 amazing coaches for a long period of time , and also of course my family

What's does your training schedule for a week period involve?
Mostly I practise twice a day , total of 4-6 hours a day

What is your next big goal for table tennis?
Olympic medal is still a big dream for me

Who has been your biggest rival out on the table since you started playing?
Used to be few generations of Chinese players , JO Waldner , Timo Boll , now many others also, upcoming players

What was it like winning 3 World Cups? Is this a feat you hope to achieve again in the near future?
It was great , especially the last one (beating Ma Long and Chen Qi). Of course I hope I can win again, only it is not that easy. (Vladimir has won the World Cup 3 times, the record held by Ma Lin (China) is 4 victories of the World Cup. Best of luck to Vladi in contesting the 2011 World Cup and his chance to make more history.) 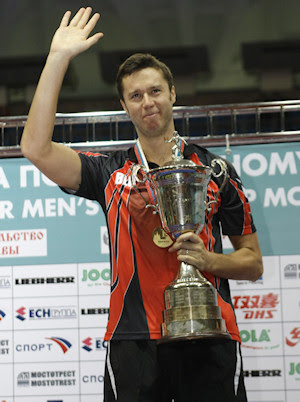 You have consistenly remained in the World's Top 10 Mens players for some time now, how do you keep on top of the new upcoming players, do you feel experience is a large factor?
I still practise a lot and there are not many new players . Of course experience is very important , still it will not help you if your opponent is much better than you

Why do you think China currently dominate the sport and what does Europe need to do to bring players to that level?
Chinese work harder , are more professional , more organized, also they have many more players . Most of top Europeans live far away from each other , we should practise more together like the Chinese do, this seems to work for them and is something we lack

Is there a tournament title that has evaded you so far that you have been working very hard to win?
Olympic Games

What has been your proudest moment out on the table?
Each victory is special

Who’s your favourite sportsperson of all time?
Michael Jordan

What do you do when you aren't playing table tennis?
Enjoying time with my family

First thing you would do if you won $1million?
Celebrate with my family and friends

Who’s the funniest player in the training hall?
Petr Korbel

Who trains the hardest in the training hall?
Robert Gardos

I know it sounds silly – train hard and believe in yourself .

Thank you Vladimir, from all of us, please continue to believe you can be the very best and inspire us to do the same!