It was a great pleasure for me to interview a good friend of mine who's making her imprint on the world of table tennis with unlimited passion for the sport and for fashion. I've known Sarah for many years and she's always aimed high and then got out there and done what it takes to do her best which is something I've always admired. She currently plays for Borussia Munster in the German League. Thanks for the interview Sarah!

How long have you been playing table tennis for, when and how did you start?

I have been playing for about 12 years now, I started in New Zealand when I was 14. My dad took me down to our local table tennis stadium to play and I was asked to join the junior weekly squad. I also played a lot since then with dad at home in the garage! (he bought a table soon after).

What has been the highlight of your table tennis career so far?

What are your table tennis goals for 2012?

To make the New Zealand team for:

3. The Oceania Championships in Fiji (May/June)

To win more matches for my team at club level, to improve the singles/doubles winning statistics. Work together with my team so we can go up to division 3 next season.

To defend my titles - singles, doubles and mixed doubles at the New Zealand North Island Championships (May).

To win the New Zealand Open in Singles - this one, I think most New Zealand playes would agree, is the most prestigious title a NZ player can have - a national title

Who is your favourite international player and why?

I like Soo Yeon Lee, she was the New Zealand Champion in 2004 and she is the first to bring fashion into table tennis and present table tennis in a fashionable way to the public.

What do you think is the place of fashion in women's table tennis?

There isn’t really any women’s fashion in table tennis. Mostly, the women wear what the men wear, just in a smaller size.
I think it would be nice if there were more fashion styles in women’s table tennis. So, in addition to shirts and shorts, there can also be skirts, tank tops, t-shirts and dresses. I don’t think everyone should wear the same things because we are all different and have our own styles. But at the moment most players wear the same thing – shorts, black skirts and shirts.
We can look to tennis women for ideas and inspiration, because they are the most successful and highly paid female athletes in the world.
Forbes released the Top 10 Highest paid female athletes last year, and there were 7 tennis players in the top 10. Their 2011 income ranged from 6 million to 25 million and they all make an effort in their appearance and outfits. However, fashion hasn’t always been as apparent in tennis in the past. Back in 1997 the women still wore shirts and skirts, but now they mostly wear dresses or matching top and skirt.
In comparison, table tennis players still wears what tennis players used to wear more than a decade ago. I think we can try different outfits and look towards tennis players because they must be doing something right!
(The Australian Open is on right now, you can see all the nice outfits the players wear!)
Are you a supporter of skirts and sports dresses for women or shorts?
I think we have room for all of the above. Some people look best in shorts, some in dresses and some in skirts. I am not opposed to shorts, I just think it would be nice to have other styles available.
Also I really like the Romanian Women's team, their calendar shoots are very styley and sexy.

What do you think of the state of women's table tennis around the world?

I think it is good (except for the fashion), and I love watching all the international matches, especially players from China, Singapore, Japan and Romania.

What inspired you to start your blog? How long has it been running now?

I had the account since May 2009. In the beginning I started my blog mainly to keep my sponsors up to date - Tibhar, Prestige Lawyers, Olympic Pools and Fitness, Waikato University Sir Edmund Hillary Programme and Star Cosmetics. I also thought it would be a good idea to show New Zealand players what it is like to play in Europe. I also hoped to inspire New Zealand junior players, to show them what is out there and what is possible.Also when I was young I used to hear about the NZ Senior players playing professionally in Europe and Japan, but it was hard for me to imagine what that was like and I didn't come across magazines or newsletters detailing their experiences. Back then I didn’t think that my blog would be read by so many people around the world.
I also like writing, photography and documenting things, I made table tennis scrap books for years 1999- 2004. That was before I used facebook and online blogging was not so common. So I had a lot of photos that was printed out as well as tournament pamphlets and programmes, I would cut pictures out and write about different experiences.
The two scrap books are back in New Zealand. Maybe when I go back I can try add the 1999-2004 contents to my blog too!

You made a lot of sacrifices to move to Germany to train to reach your goals, how do you feel you have progressed and do you think it has been an experience worth the sacrifice?

Since I came to Germany I have learned so many new things about table tennis. It is totally different to playing in New Zealand. It is also completely different to training trips to Asia (I have been to Taiwan for training 3 times – each time for about 2 months during my university summer break). It is awesome to play in Europe, it is more competition based, whereas in Asia it is more training based – even players from Taiwan, Korea and China play in the German leagues.
I think I am still progressing, I look forward to playing New Zealand/Australian players in the near future as I think that is one of the ways I can measure my progress.
The experience is always worth the sacrifice if you are following your dreams and goals. But you also have to have good plans – financially and career-wise, otherwise the sacrifices may be more than you can afford.

What has been the highlight of your time overseas so far?

There are so many =) Playing for my club – I am very lucky to be a part of a club which has a coach and 3 women’s teams and who are very nice players and look out for me. To be able to compete at international tournaments such as the Swedish and Finland Open, the Norway Cup, to be able to play against Ding Ning the current world champion and world number 1.
To attend the German magazine “GALA” end of season party that involved the table tennis night club – SpiN New York, that was so much fun.
Had the chance to visit London and Paris during the mid season break.
The World Championships this year is in Dortmund – very close to where I am in Germany, and that is going to be an amazing Championships!

Do you think training in high level countries, the likes of Germany and China, Korea etc is necessary in building the skillbase and knowledge to become a professional player?

I know you love posing for photos, which is your favourite one so far? :P

Haha yes I really like photography and it is a way to capture a special moment forever!
I like the one of myself and Michelle Beaumont at the Finland Open teams event, we had an upset win over a Walsh pair in the doubles and we gave each other a high five! It was only weeks later that I found out there was a photo by Stu Bromley which captured that moment!!


I also like the one from the Gala party, where I am photographed in a red dress, with the founders of SPiN - Franck Raharinosy and Jonathan Bricklin playing table tennis next to me – I am a huge fan of SPiN and their work and I was so excited to meet them and to be at the event. 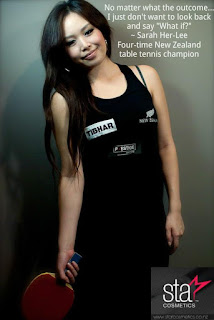 Off the Topic Questions
Who’s your favourite sportsperson of all time?

What do you do when you aren't playing table tennis?

Somewhere I haven’t been. (and preferably go in spring/summer time)

First thing you would do if you won $1million?

Have the courage to follow your dreams – keeping in mind that it takes good planning, good advice, hard work, determination and sacrifices. But in the end, as long as you have tried and did everything you could, there will be no “what ifs”, “could haves” and “should haves”. There will be no regrets.