For some of you Adrian Crisan may not have been a big name until you saw him in the Semifinals in last weeks Hungarian Open. But for those of us who have been on the scene a while, Adrian was in the top 20 in the world for over a year back in 2006 and recorded wins against players like Timo Boll and Michael Maze. Since 1997 Adrian has played the German league and spent 10 years representing Ochsenhausen in the Bundesliga. He recently moved to play for Werder Bremen. On WR he has qualified for the Olympics so best of luck to him. Thanks Adrian!

What is your biggest and proudest moment in table tennis to date?

When we won the German Championships with Ochsenhausen and the 3 cups also, were very very special to me and when I win the Brazil Open.

On World Ranking you have qualified for the 2012 Olympic Games, what do you hope to achieve there?

I want to win one medal in the Olympics, this before Budapest :)

Why do you think the Chinese are so dominant in the sport? Who do you think will be the next country to rise and start beating them?

I think Japan become stronger and stronger, Germany and Korea too. I think Chinese are good because they have a lot of players and top coaches and they have big advantages with the material, this is my personal opinion.

What do you think the sport of table tennis is lacking around the world? What could be done to improve it from an international player’s perspective?

I don't know what we have to do really. We have a small sport, cannot compare ever with football or tennis. I will like that we have better prize money, and maybe have like tennis with 4 grand slams or something with big money. A World Tour with much more money would be nice :)

You recently started playing Bundesliga for Werder Bremen after 10 years at TTF Leibherr Ochsenhausen, has this been a big change for you? How do you feel about the German League system for your game?

It was a big change for me moving to Bremen, moving from small Ochsenhausen 9000 people to Bremen 500000, and from deep south to the far north, it is change, people are diferent, climate is very different, but nice people everywhere, in south and in north I was lucky. Very good time I spend in Ochsenhausen, never will forget, and now I feel happy in Bremen, it's really a nice club and I will like to win one title here too. I feel Bundesliga a very strong league, very dificult to play, happy to play so many years here and hope for some more, for my game was very important, playing top players every week bring much to my game and a lot of experience. 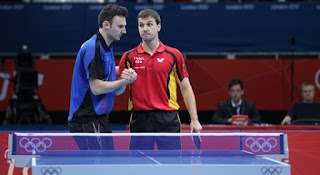 What do you think is most important in creating a successful international player?

The most important thing is to have patience after you train hard. I think I like this.

I will give one point.

How was your confidence level going into your match with Joo Se Hyuk in the Semifinal of the Hungary Open? Did you think you had a good chance to perform well and how did you feel you performed in the match?

I go into to semifinal with confidence , I was thinking I had a chance. I had a chance during the match also , but unfortunatly I start to bad and make unforced errors too many in beginning.

You managed to defeat Chen Weixing by 4-2, was this a good warmup for playing Joo for you? How different is the gamestyle when you play Chen and Joo?

Against Chen I was playing good and feel good all the day, also earlier against Gionis . Compare Joo and Chen , I think Joo defend more with forehand side and Chen attack more. Both unbelieveble top players.