Thought I would throw in a borderline title just for fun ;) Last time I asked a handful of international table tennis players whether at 10-0 they mercifully gave a point or dominated 11-0. This time I found myself sifting through some different players to find out if they had anything they did before their matches to help them focus or to bring them good luck.

'I like to listen to music' Tiago Apolonia, Portugese National Champion. Team Europe.

'I put my racket on the table and then make a run in a circle and put my shirt button on' Mattias Oversjo, Ranked 11 in Swedish Men on ITTF Rankings.

'I always tell myself I can do it before I play! I say it to myself loud!' Will Bayley, European Class 10 Champion.

'My mum bought me a necklace for my 21st birthday and I kiss it before my matches' Kelly Sibley, English National Women's Team.

'I just finish warming up half an hour before the game. Then I turn my ipod on, I have a playlist prepared, then I just listen to music and think about the match. Sometimes I take a few words with my coach before the match' Hunor Szocs, Romanian National Mens Team.

'I do nothing before my match, I just try to concentrate and think about my game. And as some players I don't change my t-shirt in which I won in my previous match ;)' Margarita Pesotska, Bronze Medalist 2011 European Championships.

'Not really. I'm just always the same warm up and thinking about my next match' Christophe Legout, French National Champion. 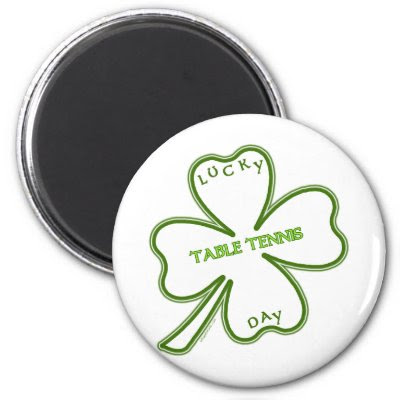