What I Learnt from Playing Table Tennis in China

A trip to China is really a significant experience for any table tennis player and I was no different. Much to the surprise of many players who asked in the past, I had never trained in China at any point during my playing career. I finally had the opportunity which expanded into one of the biggest journey's I have ever undertaken.


I left the USA and headed for Zhengding National Training Base, 3 hours drive from Beijing. I went with a team from LYTTC which included Judy Hugh and Thomas Benson, both coaches from my club and a group of training kids. I spent 2 weeks training in Zhengding. You can see my blog posts here:

So what did I learn in Zhengding? Every half day was multiball. Multiball was something I had never been overly committed to, but doing it so frequently in Zhengding made me realise a lot.

It's physically demanding. I was on my way into better shape when I left the USA but China took me a step further. I realised how important multiball is if you really want to be a serious player, because it is really serious training. You wake up in the morning exhausted, can you handle multiball for another half a day? That's the real mental test.

The Chinese players are tough, they do this day in day out. Repetition, monotony. During my time there, summer, it was hot and humid, there was no escape from the heat. It was torture for my first few days there. I adjusted to it, torture eventually became something normal. That's really why China excel at this sport, the incredibly high levels of training which may seem like hell to many of us are so incredibly normal for them.

I sat and watched players and saw how easy their mechanics looked and imagined how many hours of multiball they had endured during their lifetime. As I continued through the 2 weeks the multiball became easier and I could feel my mechanics were improving. In my first 2 multiball sessions I needed breaks but after that I was fine soldiering through a bucket without a break. I learnt what I called 'cruise mode' where mechanics overrule the need to be frantic. This breakthrough allowed me to perform some hellishly consistent boxes of multiball like the one below.


I also learnt to value opportunities to rest more than I ever did before. The schedule was more than I had endured before and so sleeping in the afternoons became commonplace.

On one of my final days in Zhengding, Andrew Baggaley from Great Britain arrived to start 16 days of training. I had dinner with him and his brother Stephen and had the chance to hit with him a little and have some fun. I have organised an interview with him once he is back in England too :)

I travelled to Beijing for a week after this experience and trained in Guo Yan's training camp and my last day with the Beijing women's team (one of the best in China).

I had parted ways with my team and I was now in a foreign country by myself where I could understand small bits of the language but not enough to communicate. So what did I learn in Beijing?

No matter how good you think you are playing, there is always a player who can decimate you not far away. China can be whatever you want it to be, your perspective needs to be positive or you can walk away with so many doubts. Whatever you do, don't compare yourself to them, it's simply not comparable. Many of these players have been through incredibly rigorous training from a very young age and sacrificed education for this sport. The kids at Yan's training camp were fairly new players and they were really nice kids. I didn't have too much trouble beating them even with a 4 point handicap against me. Training with Zhou Fang Fang former national team player was an amazing opportunity. 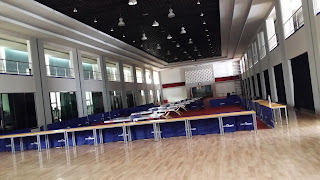 She was a wicked training partner, very consistent and very accurate. Likewise the Beijing team were much better than me in the matches. So what went through my head? Why am I here, this will make no difference. Look at how many amazing players are in China!

I learnt how small the world of table tennis really is. I met with Guo Yan for lunch, she was incredibly nice to me and very welcoming. It showed that I have achieved what I set out to achieve with my blog, I took the big step closer to the highest level international players and brought the experience to you guys. It took me 4 years to create this network, which I continue to build. Now I have further expanded my links and my next stop on the journey was key in that.

The ITTF World Tour China Open 2015 in Chengdu, Sichuan is the hardest event on the tour, as such qualification is cut-throat. Single elimination from the word go. So why would I go? Well I was in China, it's an experience beyond all else and I wanted to take a shot. Players I had interviewed were going and I wanted to meet up with them also.

I spent an incredible amount of time with Vladimir Samsonov (one of my blog's biggest supporters) and Timo Boll. I dined with them, watched them warmup and play matches, met their families. I ate with Persson, Gardos and Lundqvist a few times. Let me tell you, these guys are unbelievably welcoming. It was an honour to get to know them a little better and to spend time with them, they are very friendly and real legends on and off the table.

I also spent time speaking to Joo Sae Hyuk (we both have the same auto-immune problem) and Korean legends Kim Taek Soo and Yoo Nam Kyu. I have noticed that most Korean players have a good handle of english which is really cool.

I played with Britt Eerland and had some fun matches. I shared a bus and a flight to Beijing with the North Korean team, they were really friendly. They were a little reserved but you can see they are very nice people.

So what did I achieve and learn? Well a lot of interviews organised (you wait! ;) ). I played Yang Heng Wei from Chinese Taipei (160wr) and lost 4-0. I saw what I needed to really step my level up. I saw how insane Chinese fans were (especially after signing well over 100 autographs in one day >.<). I learnt the habits of some of the best international players and heard stories from the greatest players of my generation and before.

I saw live what I had watched on a screen for so long. I enjoyed the audience involvement and the vibe, the venue was amazing too.

My trip to China may only have been for 1 month but I took so much away from it. It really is an experience that I will never forget and it has given me the motivation to continue along my path in all my table tennis goals.

The Pyramid Rule: Advantages of Staying Close to the Table as an Offensive Player

Some years ago I coined a rule called the pyramid rule, whilst writing a coaching article for Table Tennis University  I have used that rule...

Promote Your Page Too